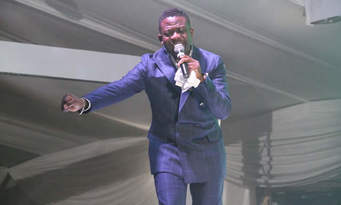 SAMA26 to honour legends with Lifetime AchievemeSAMA26 is proud to announce a distinguished line up of Lifetime Achievement Award honourees. They are Bishop Benjamin Dube and Dan Tshanda (posthumous), each representing a genre in which they excelled and blazed a trail.

Known as a music ministerial visionary, the anointed singer, songwriter and producer Bishop Benjamin Dube is a gospel legend. The Johannesburg born veteran began his ministry in 1986 with the crossover hit Holy Spirit selling over 25 000 units. His first live album I Feel Like Going On was a platinum seller and he boasts a following across the borders of the African continent, USA, Sweden, Netherlands, France, Australia, Japan and the UK. Dube is the founder, CEO and senior pastor of High Praise Centre in Vosloorus, Ekurhuleni and is a recipient of countless music awards including the SAMA. He is now a sought after speaker and has shared podiums with the likes of Nelson Mandela and Thabo Mbeki and religious leaders like Bishop TD Jakes, Kirk Franklin and Andrae Crouch. He is the owner of Dube Connection music label which has so far produced numerous albums. He has fathered, mentored and inspired many gospel and secular artists in production and music.

The late Tshanda dominated the 1980s bubblegum pop scene with his production prowess. The music giant from Soweto rose to national stardom with his group Splash following the release of their 1986 classic album Peacock. His impressive run on the music charts was guaranteed by albums such as Snake and Tshokotshoko. The 1990s saw him extend his reign with powerful releases such as Eye for an Eye, Khoma Khoma and Why. By the end of the decade he opened his own company called Dalom Music Distributors and he entered the 2000s with a string of best selling albums such as Ndivhuwo and Sethopha. Tshanda has a strong following in countries like Zimbabwe, Botswana, Namibia, Swaziland and Nigeria.  His music has crossed the seas to territories in North America, Europe and Australia. It was under his tutelage that artists and groups such as the late Patricia Majalisa, Matshikos and Dalom Kids became stars.

This year’s International Achiever Award recipient is Ndlovu Youth Choir from Limpopo. Their performances on the reality talent search show America’s Got Talent took them to the final round and captured the hearts and minds of viewers around the world. They have been signed by Sony Music in partnership with Syco Entertainment, headed by British entertainment mogul Simon Cowell. Their debut album was released in November 2019 and delivers their signature songs that took the choir from the village of Moutse to the heights and hearts of American showbiz. The voices of Ndlovu Youth Choir have emerged as proud ambassadors for a united South Africa.

Nhlanhla Sibisi, RiSA CEO shares: ‘It’s a double whammy as SAMA26 decorates the already colourful careers of these sons of the soil. This is the highest honour from the SAMA and to have artists of this calibre accept it is a compliment to us and further proof that the SAMA remains the most coveted and prestigious music award ceremony in the country. We are particularly pleased that one of our recipients Bishop Benjamin Dube, is alive to see the industry honour him. To Dan Tshanda’s family, this is our contribution in his memory and a celebration of his legacy that we wish brings you comfort. We also beam with pride for the success of Ndlovu Youth Choir and the exemplary spirit that shows to all African youths that everything is possible. They are worthy of the honour of International Achievement Award. A hearty congratulations to our recipients.’

Nomsa Philiso, Director of Local Entertainment Channels at M-Net says: ‘We would like to salute this year’s recipients of the Lifetime Achievement and International Achievement awards. These musicians deserve the recognition for their hard-work and dedication, for giving us timeless music and for flying South Africa’s flag high. We honour and celebrate these musicians for their lasting impact and contribution to the Mzansi music industry.’