Suzuki Swift punches above its weight 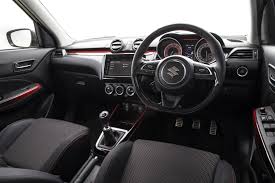 Compact hatchbacks are now a formidable feature on South African roads, and thanks to the stiff competition, new funkier models enter the market all the time. The Suzuki Swift Sport is one such model.

And by just one look at the small car, the feeling that you are looking at a little giant ready and prepared to punch above its weight is inescapable.

At 970 kg, the new-generation Suzuki Swift Sport, which recently launched in SA, is even lighter than the last generation models by all 90kg. But lighter does not mean cheaper: the Suzuki Swift Sport entry level is priced at R327,000. Clearly not a cheap car, but with plenty of reasons why.

Firstly, the Sport is driven by  a direct-injection 1.4-litre 4-cylinder BoosterJet turbopetrol engine comes with a revised air intake,  an integrated exhaust manifold, a pendulum-style engine mounting system. This engine provides decent power, delivering  103kW at 5 500 rpm and 230Nm of peak torque between 2,500 and 3,500rpm.

The new model, all conditions allowing, has the ability to accelerate from 0 to 100kph in just 8 seconds and reach a top speed of 205kph. These performance figures apply to the two models – the entry level 1.4 MT and top ranger 1.4 AT, the major difference between the two being that the latter is automatic transmission.

Despite being lighter than the previous generation Swift, the Sport offers a safer frame, via its twice as thick ultra-high tensile steel which, unlike the past models, is supported by a continuous-frame chassis. An impressive engineering feat giving the Sport the kind of frame that says “see how I flex my muscles”.

It’s not all about power, because this car is downright beautiful just to look at, from its reverse-slanted front grille with honeycomb pattern, LED headlamps and fog lights slightly hiding  between two large bumper cut-outs  and a front splitter with carbon-fibre type patterning.

The shiny 16-inch diamond-cut alloy wheels dominate the flanks’ beauty stakes, while the rear sports  darkened privacy glass to the rear windows and carbon fibre-patterned side underspoilers. These spoilers, combined with the redesigned tailgate spoiler, new flat covers under the engine and main floor and new, larger front strakes, boost the 1.4T’s aerodynamic efficiency by 10% over its predecessor. The large LED taillamps complete the kwaai look of the Sport, which you will see when it overtakes you!

The sporty touches inside boast grippy semi-bucket front seats with extra side bolstering and stainless-steel sport pedals. The dash has everything a modern motorist want from a car, no matter the size. The 7-inch colour touchscreen infotainment system holds the central spot in the cabin, answering to aesthestical needs as well as to sound and entertainment expectations. It  offers Bluetooth streaming and USB connectivity and displays the feed from the integrated reverse-view camera.