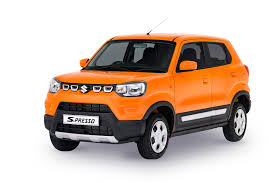 Budget was the main motivation for the making of the Suzuki S-Presso. The little but feisty SUV however does not conform to the expectations of budget cars, usually the ugly ducklings of the car market. The S-pressor is a stunner looking at it, in any of its six bold and funky colours – ornage, red, blue, granite grey, silver and white.

In South Africa, a week after its launch in March, the lockdown to fight the spread of the coronavirus was declared and that certainly had a negative impact on the mini-SUV making inroads into the local however.

Currently, the economy is at a worse situation than the before the lockdown and the presence of the S-presso in the market is now more suitable than when its design was  conceptualised.  At launch in March, the price for the entry level model was R134 900, and has risen to R145,900 since the economy was reopned. Despite the slight inccreases, across the range the Suzuki S-presso remains hugely affordable.

Apart from the good looks in the exterior, the car boasts the kind of specs a modern motorist want from a daily use car. Even better, it is extremely light on fuel, with Suzuki putting consumption at 4.9 litres per 100km. Performance-wise, the S-presso delivers admirably with 3-cylinder 1.0 litre engine producing 50 kW in power and 90 Nm of torque. Its front wheels drive is via a 5-speed manual gearbox. It is not the explosive power on the road but in its class the S-presso punches above its weight; it really gets going on its 14-inch tyres while its tall body boosts its visibility.

The fact that the S-presso is a budget car is not seen in its interior, more so the dash. It comes with a 7-inch infotainment touchscreen with Android Auto/Apple CarPlay connectivity and USB/12V charging ports. Bluetooth connectivity is also in order. Despite the lack of a multifunction steering wheel, the Android Auto interface is reachable for a manual switch-on.

The car also has a manual air-conditioner, a reverse-view camera, rear parking sensors and  electric windows at the front. Decent legroom in rear sitting also adds to amazing specs of the mini-SUV. All the seats look and feel comfortable and are covered in a mixture of cloth and vinyl.

Safety
The entire range is fitted with anti-lock brakes (ABS) with electronic brake-force distribution (EBD) and dual front airbags. Since the car’s crash test is yet be finalised, there’s no telling how it will stand up to road accidents of regular proportions. However Suzuki is adamant  its new Heartect platform is competent enough to disperse impact energy better in the event of a collision. Both the front and rear seatbelts have three-point emergency locking retractor (ELR) for better action in securing body safety in an event of an emergency.