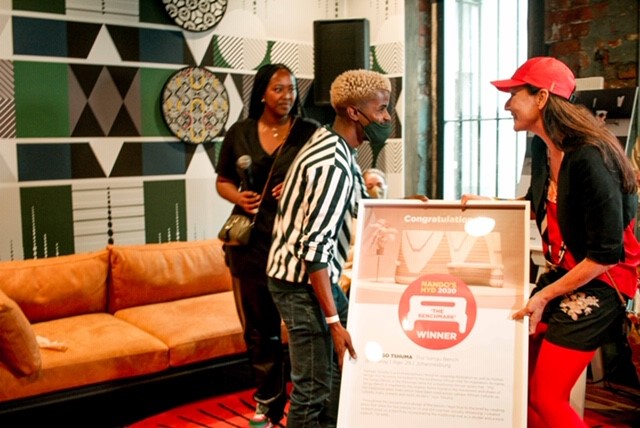 As Nando’s is no stranger to South Africa’s creative community, on 11 November 2020 the brand turned up the creative heat at its 2020 Creative Showcase hosted in the Old Fort, East Ramparts at Constitution Hill in Johannesburg. Constitution Hill is the home of the Creative Uprising, a creative movement which see the Hill as a venue for creative talent development through various venues and programmes.

A tour de force of artists, designers, and musicians from Nando’s various creative programmes showcased their work, culminating in a creative crescendo as Nando’s not only declared the winner of its 2020 Hot Young Designer competition, but also got a sneak preview of  Constitution Hill’s own world-class recording studio, Flame Studios.

Nando’s Co-founder Robbie Brozin says this event is a culmination of South African creativity that Nando’s has always been proud to nurture. “Our creative programmes sparked the careers of many an artist, some of whom have made it big on the international stage. There is so much hidden talent in this country and our global footprint of restaurants give us the platform to showcase South African creative talent to world.”

“We believe Consitution Hill is the perfect venue for the Nando’s Creative Showcase,” says Kirsty Niehaus, who heads up the Nando’s Art Initiative. “We already have a relationship with Constitution Hill through our long-term Basha Uhuru Freedom Festival partnership, and we are excited that Nando’s will be the first to host an event at the lastest creative hub on the Hill precinct, Flame Studios.”

The Nando’s Creative Showcase was carefully designed around social distancing measures, while also providing special guests an opportunity to enjoy an intimate experience of the Nando’s creativity programmes.

The hottest young designer in town

Nando’s Hot Young Designer is a talent search competition that opens a door for undiscovered young South African design talent to join our heartfelt celebration of local design. Entrants respond to a design brief and submit designs that are potentially included on the Nando’s Portal to Africa – our global Nando’s design procurement platform.

The creativity was on fire at this year’s showcase

With numerous creative activities demonstrated on the day, Brozin was particularly excited to celebrate and witness the creative process as one of Nando’s own Grillers, Mxolisi Vutha, recorded his first EP, with mentorship from Zolani Mahola in front of a live media audience inside Flame Studios.

Mxolisi Vutha participated in the Nando’s Music Exchange in London last year, after impressing curators on Nando’s own restaurant radio station, Heatwave Radio, during a nationwide talent search. At the Nando’s Music Exchange programme, he joined talent from South Africa, the United Kingdom and Australia in a weeks’ worth of collaborative workshops, mentoring, collaborations and explosive events.

Another performance that stole the show at this year’s Creative Showcase alongside Muzi and Zolani Mahola, was Bonga Kwana, a 2019 graduate from the Bridges Academy Music & Entrepreneurship programme. Nando’s has partnered with this Langa-based music school since 2018, which seeks to bring young, talented students together to pursue their creative dreams, develop their skills and share their passion for music among other art forms.

The Nando’s Creative Exchange programme is run in partnership with Spier Arts Trust and helps artists to develop their careers through mentoring and exhibition opportunities. The four artists selected for the 2020 Nando’s Creative Exchange, Fanie Buys, Qhama Maswana , Effo Munguanzo, and Aviwe Plaatjie, were displaying their work proudly at the Creative Showcase event alongside their mentor, Hanneke Benade. Alumni Nkosinathi Quwe and Ludumo Maqabuka were also present.

Taking inspiration from the Flame of Democracy, a perpetual flame that will forever serve to remind South Africans of our right to a life free from oppression and injustice, Flame Studios, a world-class recording studio, will officially be operational in February 2021. It will act as a vehicle to express the contemporary vision for Constitutional Hill as the landmark that takes it’s  first step towards building a creative hub that not only honours our past, but fuels our future.

According to Lance McCormack, Music Manager at Flames Studio, the space is designed to amplify the voices of South Africa’s next generation of musicians, artists and storytellers. “We hope that Flame Studios will encourage more visitors to this inspiring precinct and will mark a new era of atmosphere at Constitutional Hill.”

Aside from its offering as a commercial production facility available for hire, Flame Studios will fire up several talent incubation programs in the surrounding area, and beyond. “As a spirited nation, we know that all South Africans have a story to tell, and many have the talent to match this storytelling desire. We want to nurture that talent, and give them the freedom to tell that story through music,” says CEO Dawn Robertson from Constitution Hill.

Learn more about how South African creatives are empowered by PERi-PERi through the Nando’s Hot Young Designers Competition, the Nando’s Creative Exchange Programme, the Nando’s Music Exchange and the Bridges for Music Academy.